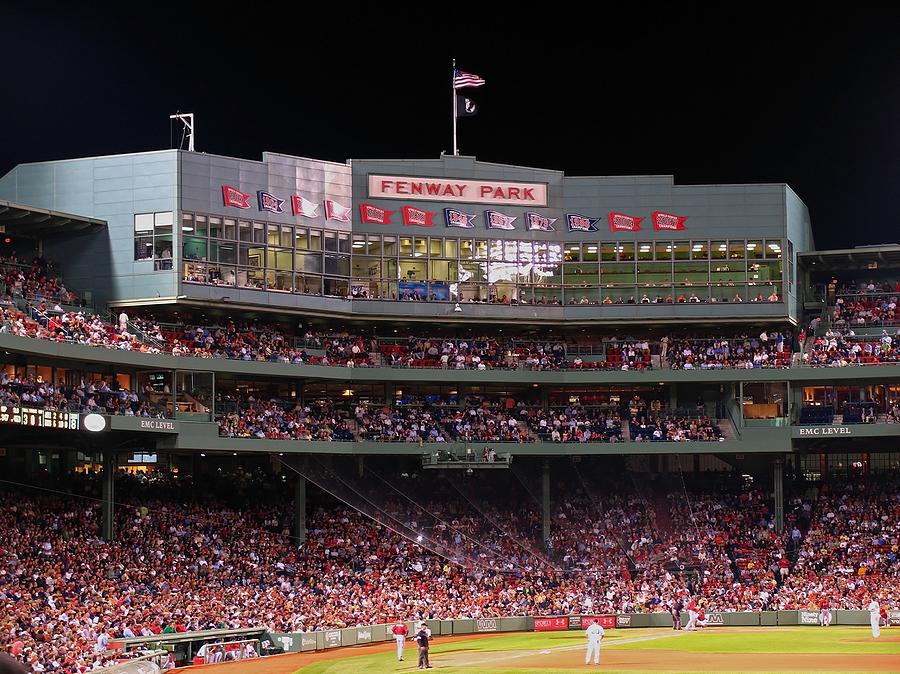 The ultimate gift and office, home or studio decoration for Red Sox Nation and the die hard Red Sox fan.

Red Sox Nation at Boston Fenway Park with pitcher Jon Lester on the way to a no-hitter. This sport photography image is available as canvas, metal, acrylic or standard photo print from my Sport Photography gallery. Prints might be purchased as matted, matted and framed or print only.

From Wikipedia: Red Sox Nation refers to the fans of the Boston Red Sox. The phrase "Red Sox Nation" was first coined by Boston Globe feature writer Nathan Cobb in an October 20, 1986, article about split allegiances among fans in Connecticut during the 1986 World Series between the Red Sox and the New York Mets.
Red Sox fans were once described by Dennis Eckersley as the ultimate manic-depressive fanbase. For all the excitement over the quality of play by the Red Sox, there is often a twinge of pessimism about the team, as the team's failures are typically blown out of proportion. Boston Globe columnist Charlie Pierce, among others, has attributed the self-perpetuating fatalism of the Nation to the intellectual legacy of the Puritans who settled Boston and instilled in the region's inhabitants a deep-seated Calvinist determinism.
The Nation has received mixed reaction from the rest of the country. In 2011, GQ magazine ranked Red Sox fans the 6th worst in the United States - and 2nd worst in Major League Baseball behind only the Philadelphia Phillies - labeling them insufferable hypocrites for their whining about the Yankees' salary-driven Evil Empire while the Red Sox maintain a significant payroll advantage over nearly every team in MLB, including a $90 million advantage over their 2007 World Series challengers, the Colorado Rockies. In 2010, Forbes magazine rated Red Sox Nation as the best fans in American sports, citing points such as road attendance and overall devotion to the team.