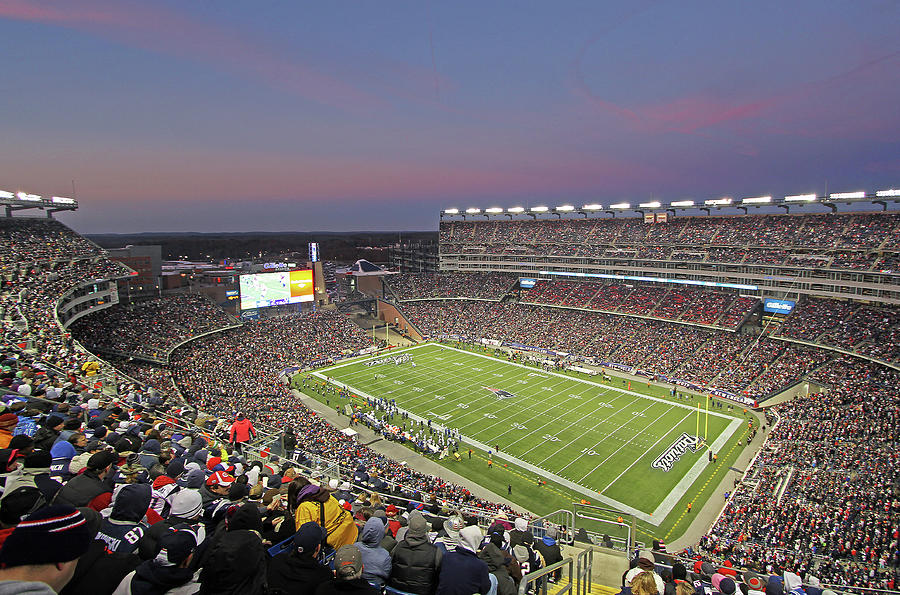 New England Patriots versus Indianapolis Colts battling it out in Gillette Stadium. Patriots won this game 59 to 24 in an rediscovered rivalry. Patriots Nation in the sport arena was exited for this huge NFL Patriots win. Gillette Stadium is a stadium located in Foxborough, Massachusetts, 21 miles (34 kilometers) southwest of downtown Boston and 20 miles (32 km) from downtown Providence, Rhode Island. It serves as the home stadium and administrative offices for both the NFL's New England Patriots football franchise and the MLS' New England Revolution soccer team. In 2012, Gillette Stadium also became the home stadium for the football program of the University of Massachusetts (UMass), making it the largest football stadium in the Mid-American Conference. The facility opened in 2002, replacing the old Foxboro Stadium. The seating capacity is 68,756, including 6,000 club seats and 87 luxury suites. The stadium is owned and operated by Kraft Sports Group, a subsidiary of The Kraft Group, the company through which businessman Robert Kraft owns the Patriots and Revolution. The stadium was originally known as CMGI Field before the naming rights were bought by Gillette after the "dot-com" bust. Although Gillette has since been acquired by Procter & Gamble, the stadium retains the Gillette name because P&G has continued to use the Gillette brand name and because the Gillette company was founded in the Boston area. Gillette and the Patriots jointly announced in September 2010 that their partnership, which includes naming rights to the stadium, will extend through the 2031 season. Additionally, uBid (until April 2003 a wholly owned subsidiary of CMGI) as of 2009 continues to sponsor one of the main entrance gates to the stadium.

The Town of Foxborough approved plans for the stadium's construction on December 6, 1999, and work on the stadium began on March 24, 2000. The first official event was a New England Revolution soccer game on May 11, 2002. The Rolling Stones played at Gillette Stadium on September 5, 2002 on the band's Licks Tour. Grand opening ceremonies were held four days later on September 9 when the Patriots unveiled their Super Bowl XXXVI championship banner before a Monday Night Football game against the Pittsburgh Steelers.