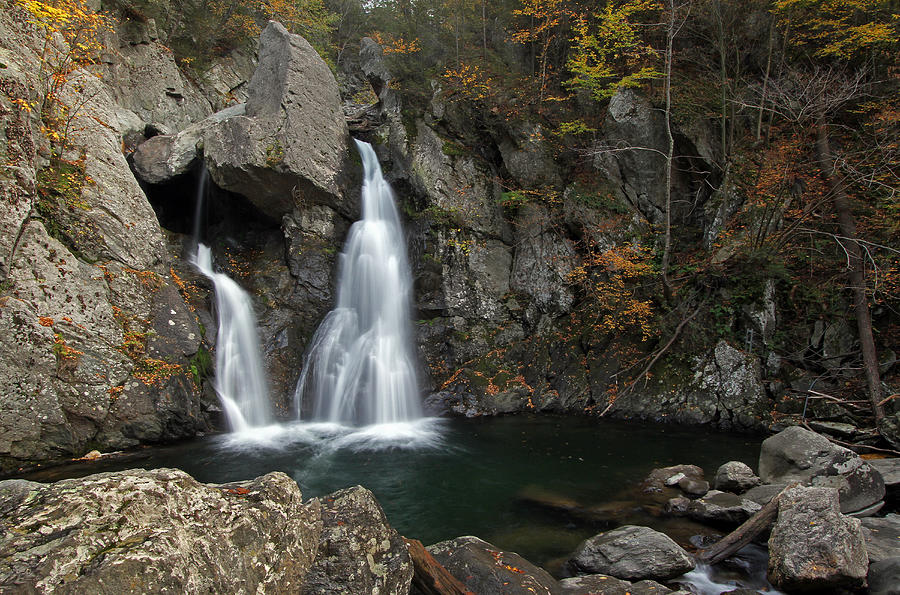 From Wikipedia: Bash Bish Falls, a waterfall in Bash Bish Falls State Park in the Taconic Mountains of southwestern Massachusetts, US (Berkshire County, Berkshire Hills, the Berkshires), is the highest waterfall in the state. The falls are made up of a series of cascades, nearly 200 feet (61 m) in total, with the final cascade being split into twin falls by a jutting rock, dropping in an 80-foot (24 m) "V" over boulders to a serene pool below. The waters of Bash Bish Falls begin at a spring in Mount Washington and after the falls, Bash Bish Brook continues on a gentler course through New York State until joining the Hudson River and flows through Copake. The waterfall is at the mouth of a gorge formed during the last ice age. At the rear of the gorge, opposite the waterfall, is a 194 feet (59 m) sheer rock wall. There are two access points for viewing Bash Bish Falls and one additional via a hiking trail network, both of the two on Falls Road in Mount Washington, Massachusetts. Falls Road is the continuation in Massachusetts of New York State Route 344. There are both upper and lower access points with views of the falls on the road. The hiking trail access is a short steep trail (blue blazed) off of the South Taconic Trail, and unlike the other 2 accessed the falls from the south side. From the top of the waterfalls, known as the "Summit", one has a clear view across Massachusetts into New York State. Recently the Massachusetts Department of Conservation and Recreation installed railings to prevent falls, which have been common from that location. More than 25 deaths have occurred at the Falls in the past century. Some were due to drowning, but most were due to rock climbing or rock jumping. This is a very dangerous area as pools are shallow, and swimming is not allowed. In October 2009, AOL Travel named Bash Bish Falls as one of the "Most Dangerous Tourist Attractions" in the U.S. and in 2010 AOL travel again named it one of the ten "most dangerous travel" destinations this time in the world. Bash Bish Falls State Park is located next to both Massachusetts' 4,000-acre (16 km2) Mount Washington State Forest and New York's 5,000 acres (20 km2) Taconic State Park.