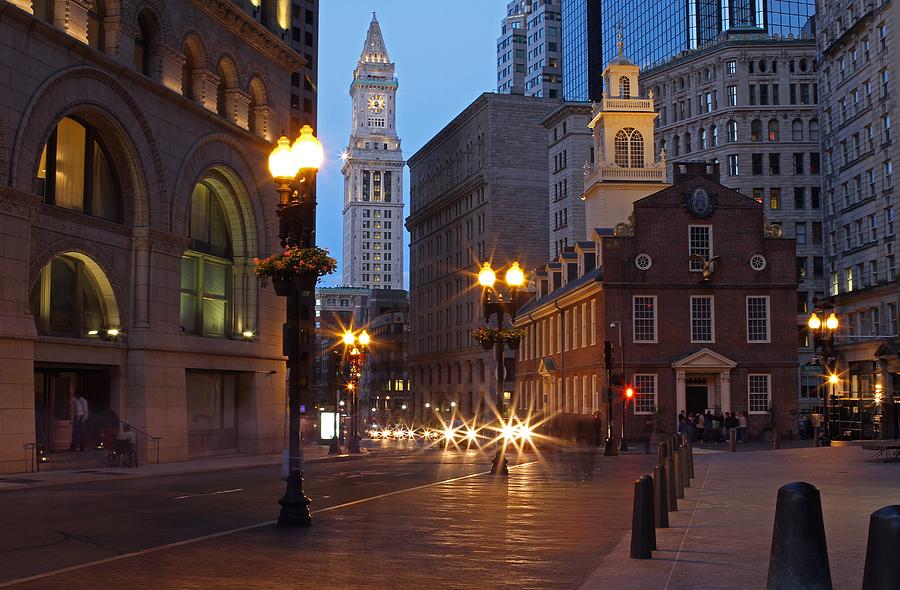 Boston Old State House and Clocktower historic district cityscape photography photographed on a stunning summer night. Twilight painted the sky blue while city lights are gleaming. The Custom House of Boston and its clock tower powering over the Boston skyline. The Custom House Tower was the first real skyscraper in Boston and a very historic and beautiful building with four illuminated clocks in its elegant spire.

From my photo blog at http://whereintheworldisjuergen.blogspot.com:

The Old State House in Boston is a historic building that many local and traveling photographers visit to capture in a beautiful picture that lasts a lifetime. It is a challenging undertaking as it is buried in modern and old architecture. The Custom House of Boston with its Clock Tower overshadows the cityscape. I tried many compositions and decided that landscape over portrait format works best for this Boston photography image. Busy State Street and Washington Street intersect next to the State House and it is not easy to capture an image at those long exposures without any cars driving through the frame. Once I set up tripod and found my final horizontal composition I figured out that my best chances are when the traffic lights on Washington Street turn green and cars on State Street had to stop further down on State Street at a red light. After a few unsuccessful tryouts I also realized that shutter speeds of 30 seconds were not going to work out for what I visualized. I therefore compromised my camera settings and switched to a slightly larger aperture of f/18. This adjustments allowed for a faster exposure time of 6 seconds while maintaining image quality and depth of field. So I patiently waited for my chance and once the last car swirled around the corner from Washington onto State Street I released the camera self-timer for multiple exposures that seemed to last minutes. Frustrated at times, because cars still appeared out of nowhere driving into the frame, I finally succeeded before twilight disappeared and captured an image that satisfied my quest for another unique addition to my magical photos of Boston galleries.