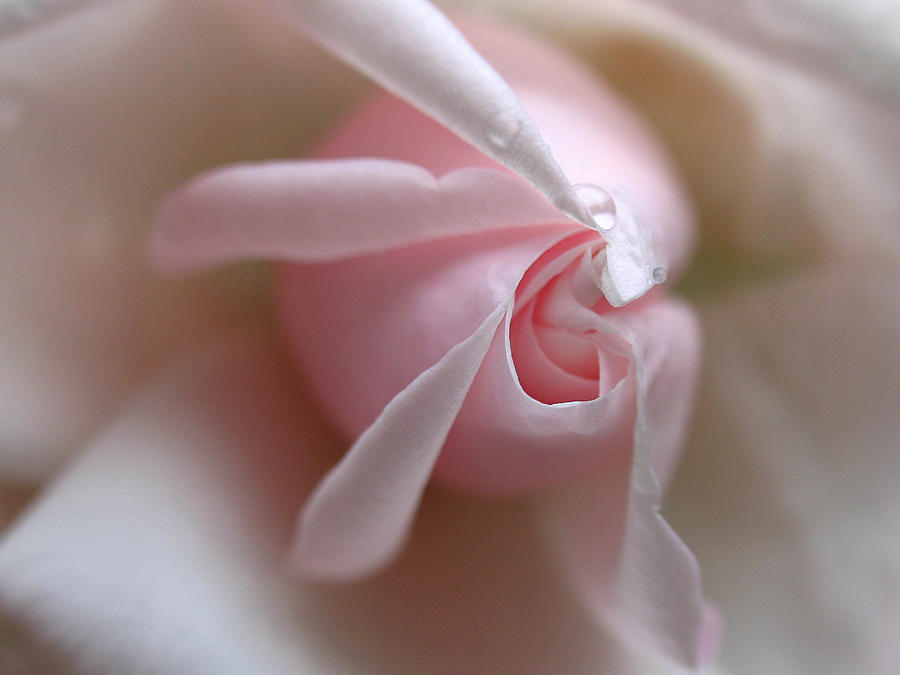 On the Verge was captured in one of my favorite flower photography locations in Brookline, the Minot Rose Garden. It is just a 5 minute drive away from my home and, unless I am photographing the Boston skyline and landmarks, you may find me there in the early morning hours during May, June, July or August. I especially enjoy exploring the garden after an early morning rain shower.
From Wikipedia: A rose is a woody perennial of the genus Rosa, within the family Rosaceae. There are over 100 species. They form a group of plants that can be erect shrubs, climbing or trailing with stems that are often armed with sharp prickles. Flowers vary in size and shape and are usually large and showy, in colors ranging from white through yellows and reds. Most species are native to Asia, with smaller numbers native to Europe, North America, and northwest Africa. Species, cultivars and hybrids are all widely grown for their beauty and often are fragrant. Rose plants range in size from compact, miniature roses, to climbers that can reach 7 meters in height. Different species hybridize easily, and this has been used in the development of the wide range of garden roses. The name rose comes from French, itself from Latin rosa.
The leaves are borne alternately on the stem. In most species they are 5 to 15 centimetres (2.0 to 5.9 in) long, pinnate, with (3�) 5�9 (�13) leaflets and basal stipules; the leaflets usually have a serrated margin, and often a few small prickles on the underside of the stem. Most roses are deciduous but a few (particularly from South east Asia) are evergreen or nearly so.
The flowers of most species have five petals, with the exception of Rosa sericea, which usually has only four. Each petal is divided into two distinct lobes and is usually white or pink, though in a few species yellow or red. Beneath the petals are five sepals (or in the case of some Rosa sericea, four). These may be long enough to be visible when viewed from above and appear as green points alternating with the rounded petals. There are multiple superior ovaries that develop into achenes. Roses are insect-pollinated in nature.
The aggregate fruit of the rose is a berry-like structure called a rose hip. Many of the domestic cultivars do not produce hips, as the flowers are so tightly petalled that they do not provide access for pollination. The hips of most species are red, but a few (e.g. Rosa pimpinellifolia) have dark purple to black hips. Each hip comprises an outer fleshy layer, the hypanthium, which contains 5�160 "seeds" (technically dry single-seeded fruits called achenes) embedded in a matrix of fine, but stiff, hairs. Rose hips of some species, especially the Dog Rose (Rosa canina) and Rugosa Rose (Rosa rugosa), are very rich in vitamin C, among the richest sources of any plant. The hips are eaten by fruit-eating birds such as thrushes and waxwings, which then disperse the seeds in their droppings. Some birds, particularly finches, also eat the seeds.
While the sharp objects along a rose stem are commonly called "thorns", they are technically prickles � outgrowths of the epidermis (the outer layer of tissue of the stem). (True thorns, as produced by e.g. Citrus or Pyracantha, are modified stems, which always originate at a node and which have nodes and internodes along the length of the thorn itself.) Rose prickles are typically sickle-shaped hooks, which aid the rose in hanging onto other vegetation when growing over it. Some species such as Rosa rugosa and Rosa pimpinellifolia have densely packed straight prickles, probably an adaptation to reduce browsing by animals, but also possibly an adaptation to trap wind-blown sand and so reduce erosion and protect their roots (both of these species grow naturally on coastal sand dunes). Despite the presence of prickles, roses are frequently browsed by deer. A few species of roses have only vestigial prickles that have no points.