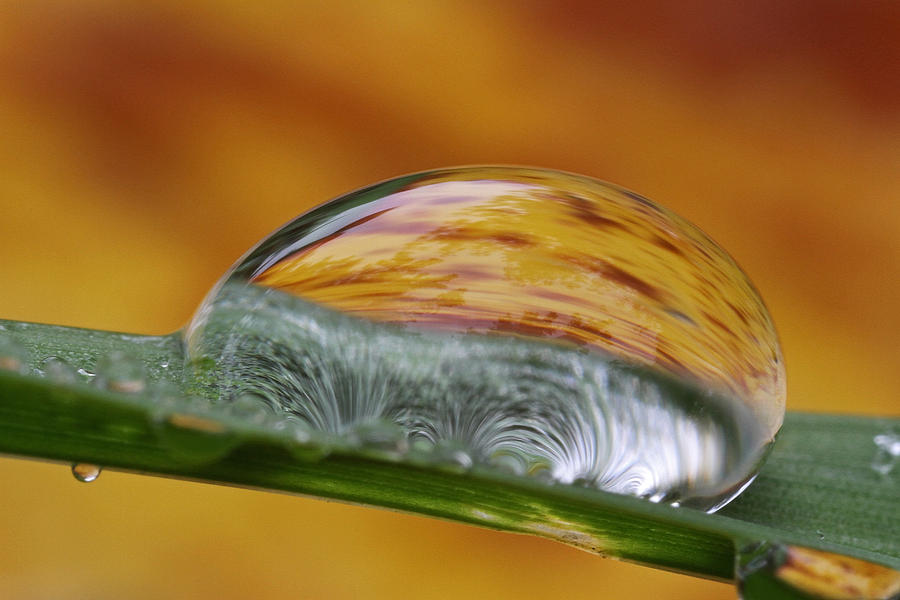 Macro photography of a raindrop with leaf reflection and orange leaf in background.

I often do not shy away from rain or drizzle and have certain locations that I visit when it is raining. One great location for rainy days and macro photography is the Boston Arnold Arboretum. On my way to the arboretum I envisioned the leaves covered in raindrops and knew the overcast sky makes for good close-up photography. My goal was to find some extraordinary raindrops on leaves that I could beautifully frame in a photograph. Last year I found a special area of shrubs in full orange and red fall foliage covered in raindrops. Unfortunately not that lucky this year! Instead I had to put in a little extra work by looking around nearby. I actually was looking for dropped colored leaves on the ground that would make for nice backdrops and secondly for a good sized raindrop that would be the main photographic subject. Finally I stumbled upon a large orange leaf with a good sized raindrop on a blade of grass in front of it; perfect I thought! It's truly amazing what nature offers when one looks carefully around. I tried multiple compositions from all angles but settled on a side view that allowed me to use the orange leaf as a full background. With the tripod and camera lowered to ground level, I adjusted the aperture setting to f/16 for maximum Depth of Field. The slightly windy conditions turned out to be quite the problem. I had to sacrifice a low ISO setting for a faster shutter speed and changed the ISO from 100 to 400, providing me with an exposure time of 1/4 second. I then used the camera self timer to minimize camera shake and enhance picture quality. During the post processing process, I removed dust spots, minimally adjusted contrast, lighting, and color saturation before sharpening the final image of Another World. It's raining ... it's pouring ... but I ain't complaining 'cause I love the rain ...

From Wikipedia: The Arnold Arboretum of the Harvard University is an arboretum located in the Jamaica Plain and Roslindale sections of Boston, Massachusetts. Designed by Frederick Law Olmsted, the Arboretum was founded in 1872 when the President and Fellows of Harvard College became trustees of a portion of the estate of James Arnold (1781�1868).
In 1842, Benjamin Bussey (1757�1842), a prosperous Boston merchant and scientific farmer, donated his country estate Woodland Hill and a part of his fortune to Harvard University "for instruction in agriculture, horticulture, and related subjects". Bussey had inherited land from fellow patriot Eleazer Weld in 1800 and further enlarged his large estate between 1806 and 1837 by acquiring and consolidating various farms that had been established as early as the seventeenth century. Harvard used this land for the creation of the Bussey Institute, which was dedicated to agricultural experimentation. The first Bussey Institute building was completed in 1871 and served as headquarters for an undergraduate school of agriculture. Sixteen years after Bussey's death, James Arnold, a New Bedford, Massachusetts whaling merchant, specified that a portion of his estate was to be used for "...the promotion of Agricultural, or Horticultural improvements". In 1872, when the trustees of the will of James Arnold transferred his estate to Harvard University, Arnold�s gift was combined with 120 acres (0.49 km2) of the former Bussey estate to create the Arnold Arboretum. In the deed of trust between the Arnold trustees and the College, income from Arnold�s legacy was to be used for establishing, developing and maintaining an arboretum to be known as the Arnold Arboretum, which "shall contain, as far as practicable, all the trees and shrubs ... either indigenous or exotic, which can be raised in the open air of West Roxbury". The historical mission of the Arnold Arboretum is to increase knowledge of woody plants through research and to disseminate this knowledge through education.
In 1872 Charles Sprague Sargent was appointed director and Arnold Professor of Botany shortly after the establishment of the institution. Together with the landscape architect Frederick Law Olmsted, he developed the road and pathway system and delineated the collection areas by family and genus, following the then-current and widely accepted classification system of Bentham and Hooker. The Hunnewell building was designed by architect Alexander Wadsworth Longfellow, Jr. in 1892 and constructed with funds donated by H. H. Hunnewell in 1903.
From 1946 to 1950 the landscape architect Beatrix Farrand was the landscape design consultant for the Arboretum. Her early training in the 1890s included time with Charles Sprague Sargent and Jackson Thornton Johnson, the chief propagator and superintendent . Today the Arboretum occupies 265 acres (107 ha) of land divided between four parcels, viz. the main Arboretum and the Peters Hill, Weld-Walter and South Street tracts. The collections are located primarily in the main Arboretum and on the Peters Hill tract. The Arboretum remains one of the finest examples of a landscape designed by Frederick Law Olmsted. It is known as the Frederick Law Olmsted National Historic Site and has been designated a National Historic Landmark.