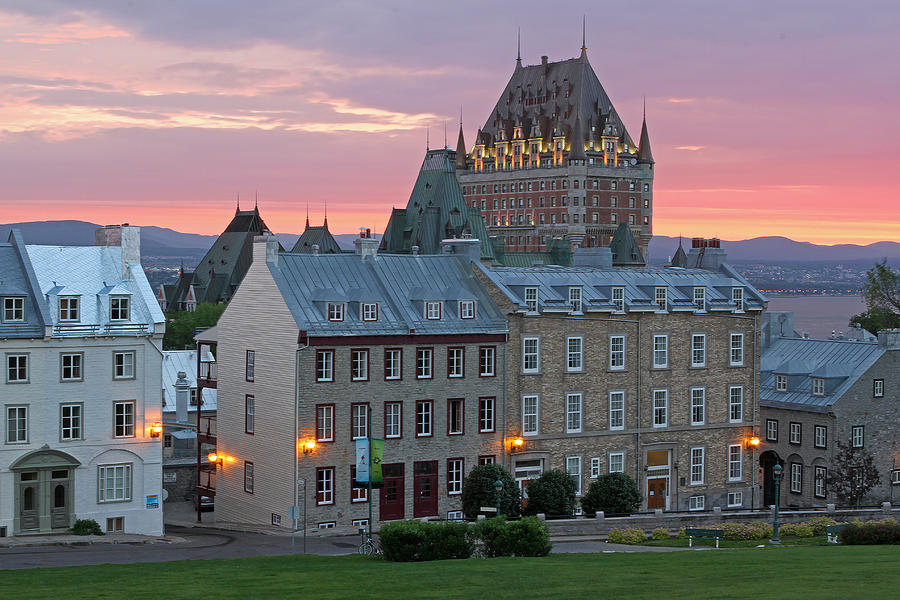 Morning cityscape photography of the grand hotel Chateau Frontenac in Quebec City. Skyline Photo was taken in mid July 2013 on a beautiful morning at sunrise showing historic buildings of the Quebec City Upper Town skyline in front of its most famous landmark the Chateau Frontenac.

From Wikipedia: The Chateau Frontenac is a grand hotel in Quebec City, Quebec, Canada, which is operated as Fairmont Le Ch�teau Frontenac. It was designated a National Historic Site of Canada in 1980. Prior to the building of the hotel, the site was occupied by the Chateau Haldimand, residence of the British colonial governors of Lower Canada and Quebec. The hotel is generally recognized as the most photographed hotel in the world, in large part because of how it dominates the skyline of Quebec City.
The Ch�teau Frontenac was designed by American architect Bruce Price, as one of a series of "ch�teau" style hotels built for the Canadian Pacific Railway company (aka CPR) during the late 19th and early 20th centuries; the newer portions of the hotel�including the central tower�were designed by William Sutherland Maxwell. CPR's policy was to promote luxury tourism by appealing to wealthy travelers. The Ch�teau Frontenac opened in 1893, six years after the Banff Springs Hotel, which was owned by the same company and similar in style.Another reason for the construction of the Chateau Frontenac was to accommodate tourists for the 1893 Chicago World's Fair, however the hotel was never finished in time. An early postcard of the hotel, circa 1910, before later expansions and the construction of the central tower. The Chateau Frontenac was named after Louis de Buade, Count of Frontenac, who was governor of the colony of New France from 1672 to 1682 and 1689 to 1698. The Ch�teau was built near the historic Citadelle, the construction of which Frontenac had begun at the end of the 17th century. The Quebec Conference of 1943, at which Winston Churchill, Franklin D. Roosevelt, and Mackenzie King discussed strategy for World War II, was held at the Ch�teau Frontenac while much of the staff stayed nearby at the Citadel. Although several of Quebec City's buildings are taller, the landmark hotel is perched atop a tall cape overlooking the Saint Lawrence River, affording a spectacular view for several kilometers. The building is the most prominent feature of the Quebec City skyline as seen from across the St. Lawrence. In 1944, Ch�teau became the action center of the Quebec Conferences of World War II. In 1953, this hotel was used as filming location for Alfred Hitchcock's film I Confess, featuring Montgomery Clift and Anne Baxter. In 2001 the hotel was sold to Legacy REIT, which is partially owned by Fairmont, for $185 million. When Canadian Pacific Hotels was renamed Fairmont Hotels and Resorts in 2001, the hotel became Fairmont Le Chateau Frontenac. In 2011 the hotel was sold to Ivanho� Cambridge, and work began on replacement of the main tower's copper roof, at the cost of $7.5 million. An image of the roof was printed on polypropylene safety netting and hung from scaffolding to hide the refurbishing project from view.